Kodiak named our pre workout Attack for good reason – it will have you hitting the iron with full intensity from the minute you step in the gym until you pump out your last rep. This isn’t your run-of-the-mill pre workout that over promises and under delivers.

When we say Attack will give you intense energy, skin splitting pumps, and razor-sharp focus, WE MEAN IT. After all, the proof is in the pudding. Take a close look at Attack’s label and you will find research-validated, time-tested ergogenic aids dosed at clinical levels combined with cutting-edge compounds that will give the term, “total domination,” a whole new meaning.

From top to bottom, Attack is the most advanced, hardest hitting pre workout packed with only the best ingredients such as:

We don’t need to tell you that a pre workout can make or break your training session. Furthermore, nothing is more disappointing than spending your hard-earned money on a product built on hype that doesn’t work.

With Kodiak’s Attack, you get everything you need to give you a pre-training advantage and nothing you don’t. Research-backed, synergistic ingredients. Efficacious dosing. Innovative compounds.

Attack is a game changer that will boost your workout performance and help you push your limits further than you have before. 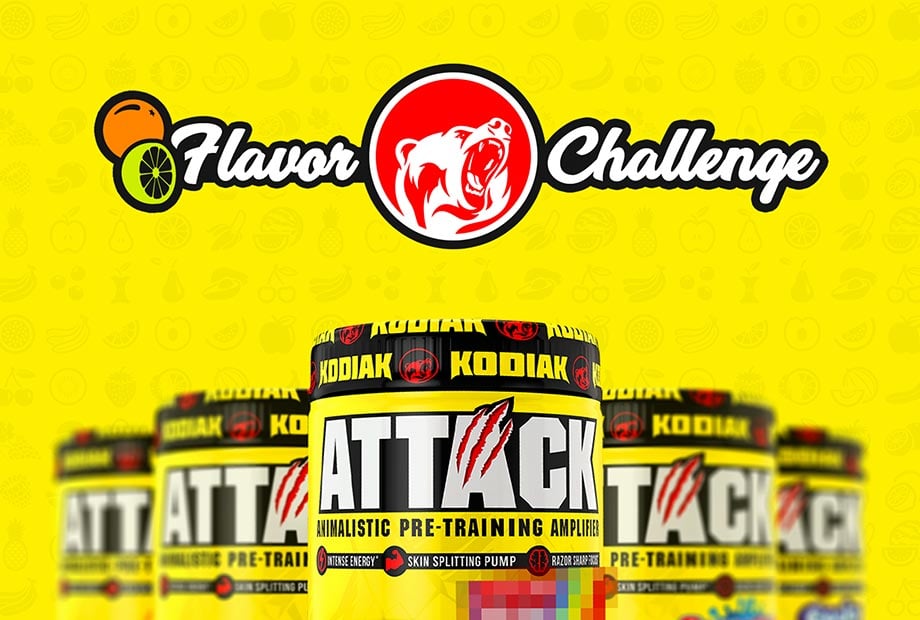 L-Tyrosine helps to activate metabolic pathways that produce the hormones epinephrine and norepinephrine – which are typically produced during moments of stress on the body and provide a boost in the terms of a “fight or flight” scenario.

This blend of caffeine helps to provide effectively dosed stimulation for your training and not keep you up all night long.

Cytidine 5’-diphosphocholine is a nootropic compound that converts to both choline and cytidine upon ingestion.

Citrulline Malate is a non-essential amino acid that eventually converts to nitric oxide. Nitric oxide is a vasodilator that can help to lower blood pressure and improve blood flow to both organs and muscles.

Arginine is a semi-essential amino acid and is a chemical precursor to nitric oxide (a blood vessel-widening agent).

Ornithine, when bound by salt at the molecular level to Orotate (orotic acid), is much more bio-available than in its HCL or free form.

As a dietary supplement, take 1 Scoop (9 Grams) 20-30 minutes prior to your workout.